Skyfeathers was created by Buddy Sears and perhaps some other people.
One of the other main people was a guy called Vinnie. Vinnie was probably in his late 20's and was a kick-ass drummer. He had a huge drum set that included electronic percussion pads, cymbals of every size, toms of every size. The set was installed into a corner of main room at Skyfeathers, on a slightly raised stage area, maybe 10-12 inches above the dancefloor. At the peak times of the night, Vinnie would get on his drum set and play along with the music that was playing on the soundsystem. He loved it and he was pretty good at playing with the songs, even enhancing them, and providing a bit of live entertainment as part of the evening's experience.
They came up with the name "crackin'" for this live percussion accompaniment.
Eventually, Vinnie was no longer part of the picture. His vast drum set was removed and that corner became either a stage, or the new DJ booth for the main room (memory is fuzzy).

I worked at Skyfeathers from the beginning, or very close to it. I remember going into the building that was being outfitted for the club and doing some painting, cleaning and other general stuff. When we opened, I worked in the drink concession, scooping ice and pouring soda into little plastic cups for what seemed like a lot of money (was it $1 ?). Not long after we opened, a guy (possibly Vinnie's dad) brought a frozen drink machine in and I dispensed that stuff too. Pina Colada and some strawberry Dacquiri concoction. It was very sweet and though I liked it at the time, I probably wouldn't now. Cleaning those frozen drink machines was pretty horrible too.
At any popular club, peak time on weekends can be an absolute madhouse for the bar. Skyfeathers was no exception. For a while, there were over a thousand teenagers in there each night. Pouring soda from 2-liter bottles for a thousand sweaty, thirsty high school kids was a delicate, yet brutish affair. The little cups could easily be knocked over by too fast a pour or a hundred other things it seems. But the people needed those drinks - ASAP. Brad Dutenhaver, who was my friend from Lakewood High School (we both played trombone in the marching band), also worked behind the bar with me. .
After I was moved off the concession into the DJ "booth", a soda gun replaced the bottles. I'm pretty sure Brad continued at the bar for some time after I moved to DJ booth.

Skyfeathers was about 15,000 square feet, pretty big for a nightclub for teenagers, or for anyone really. It started out with one big dancefloor and eventually ended up with four; the main "Top 40" floor, the Slowdance room (which was decorated in red with a heart-shaped dancefloor), the Breakdance room, and the New Wave/Punk room. Each one had its own soundsystem and DJ, except the slowdance, which I think had no DJ, probably just a tape. 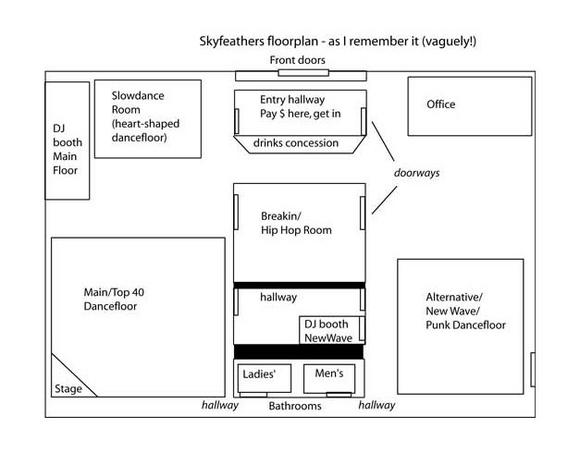 Admission price? Anyone remember? Update:Admission was $2, it says so in the Skyfeathers TV ad (as seen on Audio & Video page. I don't, though i do remember that I was able to get a few people in for free every night.

Pretty much every night we played the same songs, with a few exceptions here and there. They were the songs we liked, or at least that some of the people liked. I always tried to play people's requests, if I had the music on hand. Sometimes people would bring cassettes with the music they wanted to hear, or that they wanted everyone else to also hear, which was great. Some of the all time fav's came about because someone handed me a cassette.
The main room had a full DJ system with turntables and mixer, while the New Wave room had one turntable, a cassette player, and a simple mixer. Skyfeathers was broken into and robbed of most if not all the sound equipment. It was pretty devastating to everyone that worked there. The New Wave room ended up with a single cassette player, an amp and 2 speakers. As a result, the "mix" was pretty unsophisticated, not that it was ever terribly sophisticated to start. Now every song had to wait for the previous cassette to be ejected and the next one put in and played. Most of the songs had been dubbed onto little 10 minute cassettes designed for one song. Eventually, I bought my own turntable, went halvsies on a Radio Shack mixer with my friend Howard, and brought them in so we could at least play a few records.

The smallish room in the middle area which started life as a drink concession area, eventually became the Breakdance Room. Some vinyl flooring (the best material for breakin') was installed as a dancefloor, kept well slippery with Armor All, and the room was graffittied up properly by a real spray paint artist, or maybe a few of them. A modest but loud sound system made it heaven for the breakers, among whom I occasionally found myself.

Jaguar out in front parking lot. Buddy bought an old, cool 4-door Jag that he was going to restore. The paint was a dark red, but the gloss was gone and it was fading.

Union Jack painted on the New Wave dancefloor, the entire dancefloor. Later it was painted black and murder scene body outlines painted on it here and there.